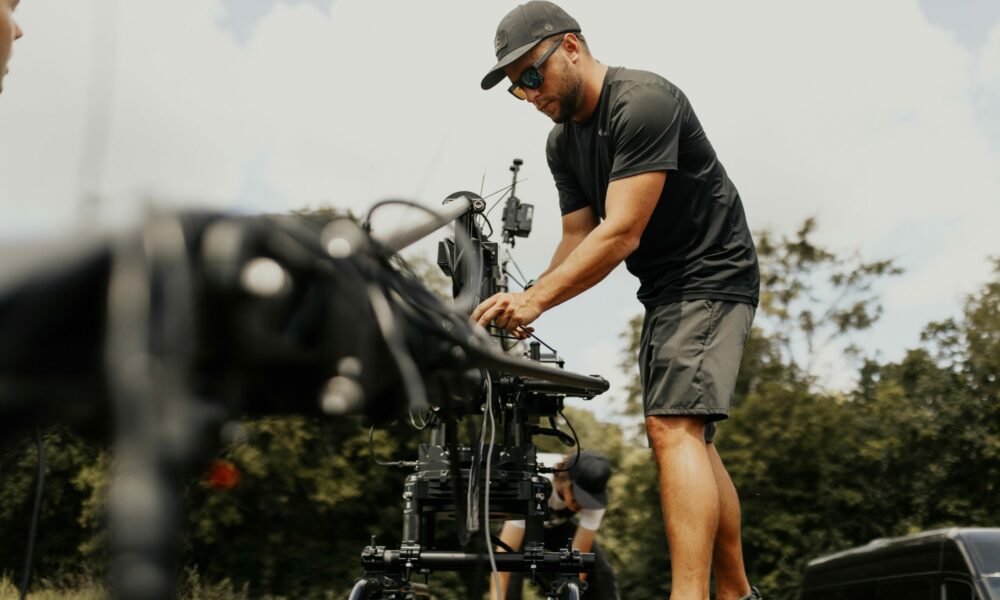 Today we’d like to introduce you to Kirk Slawek.

Hi Kirk, we’d love for you to start by introducing yourself.
I got started with Gear Seven because of some experience I had when I was younger, including internships in college. In high school, I actually had a film class that I took that got me interested in the industry. From there, I started interning and freelancing when I was in college, not knowing what I was doing. I learned a lot along the way, I went to college for business, so nothing in the film program at all. Through internships and from some mentors I had growing up, all in various areas of the industries, I gained a lot of experience in things that aren’t even a part of Gear Seven today. All of the experiences and hands-on learning helped me as we try to figure out the industry we are in now. It’s the polar opposite now from where we started, regarding the way we process everything and the way I was taught when I started more in the world of live events. We originally started with budgeting and building things in a very different way — I didn’t even know what AICP was at the time. I barely even knew what all the crew positions were at the time, but I was lucky to have some great people guide me along the way.

From there, I officially started Gear Seven in 2012 right when I graduated. I was at the teetering point of trying to figure out if I wanted to go work for somebody else in the production, but I knew I always wanted to start my own company and it wouldn’t get any easier if I didn’t do it then — probably one of the biggest initial risks I ever took. Luckily, we are still here today through all of the mistakes I’ve made and the learning we’ve experienced. Ultimately, the prior relationships I had and projects I started on such as $500 music videos, opened my eyes to different genres in the industry — specifically in the commercial and brand space. We’ve learned from everyone we’ve done and the growth all stems from there.

In the beginning, we had to learn how to do everything — from bookkeeping to budgeting and everything in between. Sometimes I laugh when I think of all the email signatures I’ve had over the years, from shooter to director to DP… I’ve probably had every crew role as an email signature at some point over the growth of Gear Seven. I can attribute so much of the growth to being able to bring on people who are talented in each part of the business and in production. Editing was one of the first areas that triggered the idea in my brain, that there are people out there who are super talented at it and love it as an art form and passion more than production, the side that I loved more.

Finding people like that was incredible, and the same idea compounded into every role and area. I knew that I could technically learn those areas, but I saw the value in bringing in these people in all positions that leveled up our work.

These people have allowed Gear Seven to create better work than I ever could as a freelancer editor/DP/director.

Through that, many doors opened and allowed us to scale more. We started off as all camera operators, but little did we know early on that we had the talents and skills and making of a real production company. By learning through our mistakes and bumps in the road of that whole process, we were able to grow to where we are today.

Alright, so let’s dig a little deeper into the story – has it been an easy path overall, and if not, what were the challenges you’ve had to overcome?
Gear Seven’s road has been generally smooth, but still a road and journey. There have been some things that could have been learned faster and adapted more easily. Looking in the rearview mirror now, we see some things that slowed us down. Understanding the industry was probably the biggest roadblock as we were still trying to figure out where we needed to be in this ecosystem of being a production company. Reinventing the wheel allowed us to be different along the way in areas but understanding how the industry works was a challenge. If we had figured that out sooner, we probably would have been off to the races a little bit quicker, but we also wouldn’t have learned as much as we did along the way and gathered the experience we did.

Outside of production learning, wearing all the hats, networking, and such on the business side, we wouldn’t be where we are without the mentors we had to learn from both our mistakes and their expertise. There are many scenarios now where I know better what to do and what not to do, but I think that’s a core part of our DNA and how we got to where we are today. We always try to learn from what we do and if we aren’t, the growth doesn’t happen as naturally.

Appreciate you sharing that. What should we know about Gear Seven?
For over 10 years, Gear Seven has strived to create with excellence and bring visions to life from the city of Nashville.

Starting as a “one-man band” while in college, founder Kirk Slawek began bringing in more and more talented creatives onto projects as the scope of the company grew. While tapping into the community of filmmakers in Music City and directors across the nation, Gear Seven expanded rapidly to quickly take on work with top-tier brands and talent such as Apple Music, Mitsubishi, ESPN, TikTok, RedBull, and more. Today, over 150 years of combined expertise live within the in-house team of Gear Seven as they continue to chase cutting-edge technology and trends, grow in their craft and produce pieces they’re proud to call their own.

In recent years, our fascination with camera movements birthed Shift Dynamics, while Arc Studios came from ground-breaking extended reality tech that is changing the course of production with each passing day. With Shift Dynamics and Arc Studios, Gear Seven has the ability to arm many projects with a holistic, all-in-one approach so clients can rest assured the team has every piece of the process covered.

Risk-taking is a topic that people have widely differing views on – we’d love to hear your thoughts.
Starting Gear Seven was the cliche’s biggest risk of pursuing the unknown. Having what I thought was a business at the time when it first started, was so minute looking back when I compare it to the industry and what we are now. Some of the other risks have been investing in some of the gear we have now before it existed in Nashville. Our robotics, camera cars, and a lot of the gear at Shift Dynamics were a risk at the time of just entering the unknown.

Looking at demands on the business side of things and areas we are growing in while figuring out how to support the needs of the equipment is a continual part of the risks we take. It’s rewarding, though, to see the risks pay off and the growth takes place by investing in the city, and the community around us, and making sure that the tools we have can be used to support our ecosystem and Nashville as a whole.

I think in general, my role now is risk management in a way. There is the legitimate risk of executing a job that we are doing and the obvious risk levels and factors that come with shoots, but there are other not-so-obvious risks as well. As our team grows with the multiple businesses, figuring out how that all works together cohesively is full of small decisions every day that all require some form of risk-taking.